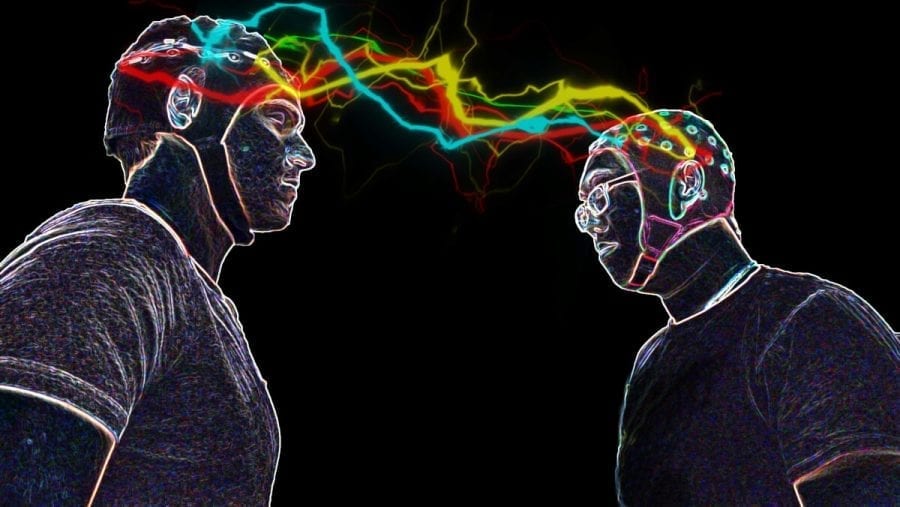 In the past few years, the brain to direct computer communication started to gain more and more attention. A few breakthroughs have traced the path for researchers towards building a powerful brain to computer interfaces that will enable a different kind of human-machine communication and interaction. Most of the research involving brain communication interfaces have focused on brain-to-computer interfaces (BCI). Less work has been done in the area of connecting two or multiple brains by developing a brain-to-brain interface (BBI).

One famous study called “20 Questions” that examined a brain-to-brain interface was done a few years ago, and it was focusing on question answering by connecting two brains and outputting a result by touching a screen. This among a few other studies represents an initial, kind of primitive brain-to-brain interface which allows for the most straightforward interaction and only two subjects (brains).

Recently, researchers from the University of Washington and the Carnegie Mellon University have presented the first multi-person non-invasive direct brain-to-brain interface for collaborative problem-solving. In their work, they address a few problems and shortcomings of previous brain-to-brain interfaces to create an interface that will push the boundaries of direct, brain-to-brain communication. The proposed method, as well as the conducted experiments within this study, are explained in the sections that follow.

Their method is based on EEG to record brain signals and transcranial magnetic stimulation (TMS) to deliver information in a non-invasive way to the brain. The whole architecture of the proposed brain-to-brain interfaces is using two kinds of modules: BCI – brain-to-computer interface based on EEG to convey information about a collaborative task and CBI – computer-to-brain interface based on TMS. A scheme of the interface is given in the image below.

The interface allows three human subjects to collaborate and solve a task using direct brain-to-brain communication. In the experiments, the novel brain-to-brain interface was used to perform a collaborative work based on a Tetris-like game.

Since, this represents the first, non-invasive multi-person brain-to-brain interface, and the researchers explored the possibility to prioritize information as an essential feature of communication in social networks.

The initial implementation of BrainNet – the proposed new-generation brain-to-brain interface, allows for two “Sender” subjects and one “Receiver” subject to communicate. The interface does not require any physical action by the subjects.

The experiments were organized in a way that three participants are trying to solve a collaborative task – one of them, designated as the Receiver, is in charge of deciding whether or not to rotate a block in the Tetris-like game before it drops to fill a gap in a line at the bottom of the screen. This participant does not have any information about the bottom of the screen, therefore, cannot make a logical decision about the game. The two other participants, designated as the Senders, can see the entire screen and their task is to make the correct choice (rotate or not) based on the shape of the current block and the gap at the bottom and to inform the Receiver of the decision via the brain-to-brain interface.

In a setup like this, a trial is composed of two rounds: the first round is as described above; while in the second round, the Senders are given the opportunity to examine the Receiver’s decision (shown on their screen as the block, now potentially rotated, mid-way through its fall) and have another chance to make new (possibly corrective) suggestion.

To measure the performance, the researchers use simple but also some more advanced evaluation metrics. First, they measure the number of correct block rotations, reporting a mean accuracy of 0.8125 (much higher than random 0.5). They also compute binary classification metrics such as AUC – the area under Receiver Operating Characteristic (ROC) curve.

To quantify the degree of communication and amount of transmitted information between subjects, the researchers employ mutual information measure – MI. As they report, a significant difference in the amount of transmitted data has been noted compared to a by-chance performance. Also, as expected due to the experimental design, they report significantly higher MI values (that is, more massive amounts of information being transferred) between a good Sender and the Receiver than between a bad Sender and the Receiver. 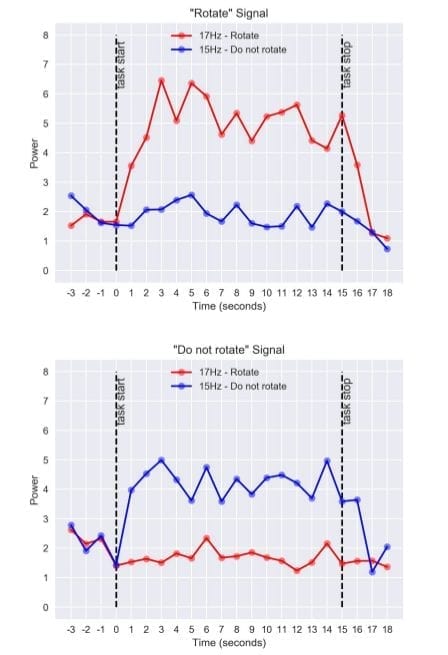 It is the first brain-to-brain interface to combine EEG and TMS signals in the same human subject, and it introduces an important feature – differentiation of the credibility of information. As such, this contribution represents an important step towards seamless brain-to-brain communication and collaborative problem solving through BBIs.